Ken and Terry needed the library for a project they’re working on, so here I am again, getting in some wifi time.

I have been incredibly, unbelievably lazy.  Is it Wednesday already?  Wow.  The kids are in their last full day of school.  Thursday and Friday will be half days.  Sheila’s parents will be coming in on Friday, and graduation for Kyle is Sunday.

I’ve taken a very short walk each day, trying to stretch out those hip flexors and regain some strength.  I’m continually distressed at how weak I am, although I shouldn’t be surprised.  It’s been over two years of back issues now, and exercise has been out of the question for quite a bit of that time.  But I’m determined to regain whatever I can, and being on vacation  gives me the opportunity to get started. There’s a very convenient walking path right outside the back gate.

The weather has been gorgeous, although hotter than I’m used to.  Today is lovely, about 75 right now and breezy. The best thing is that I haven’t needed ANY of my allergy nasal medications. That’s just amazing to me, because back home in PA I’m pretty sure I’ll have to be right back on them.

I can see Alayna’s middle school if I crane my neck a little bit. Very roomy, and large athletic fields.  She loves it there. She’s having lots of opportunities to be in music and drama, which she loves.

There are lots of pretty scenic areas in and around the city.  If I had to move here, I think I’d be okay.

Not that I want to move 🙂

We had an uneventful flight from Philly to Dallas/Fort Worth to Sioux Falls.  Kind of a round-about-route, but also less expensive that a straight route.

I had a fascinating seat mate on the Philly-to-Dallas flight. He is from South Africa, here in the States to get an education.  Smart and articulate, with a charming accent, he  was eager to answer my questions about what is going on in his home country right now. Back in the end of the Victorian Era, @ 1901-02, the Boers (Dutch) and some English took control of South Africa. The indigenous peoples were removed from their tribal lands, and  the white colonists created a new order.  Now, those natives whose parents and grandparents were dispossessed are demanding the return of their land, with no remuneration being offered, and the whites must all leave.  Power has been regained since the end of Apartheid.  My seat mate had a lot to say about all of it, and he was reasonable and practical.  His major concern is that as the whites leave, the economy, in his words, will tank.  He says that his people will suffer, because they simply don’t know what to do with the land. He said that the President has been convicted of at least 750 counts of corruption, yet he was re-elected because he promised that the poor would be restored to their homelands, and that they would all become wealthy, like the whites had been.  He said that the history of Africa has this story repeated in country after country, yet they never seem to learn from it.

He also told me that he can thank CNN for helping him see that he needed to stop being a Democrat and switch to being a Republican.  He is studying economics, and he believes in free enterprise and capitalism.  Made me laugh out loud 🙂

It was delightful, of course, to see Kyle and Alayna, who have both grown up SO much since we last saw them.  Ivan was away on a band trip, and didn’t get home until late last night.  He’s so tall!  And his voice has deepened to what I’m sure is a very nice bass singing voice.  He and Kyle still look very much alike.

After supper last night, Sheila, Kyle, Alayna and I went for a short walk.  Here are a couple of pictures:

Well, the pics are going to have to wait.  I can’t figure out how to copy/paste them with from my email to here.  I’m sure it’s simple, and I’m usually pretty good with this stuff, but not this time.

Anyway, we’ve had a relaxing, enjoyable couple of days.  Kyle graduates on Sunday.  The kids have school through Friday, although half days only on Thursday and Friday.

You may or may not hear from me again until we get back home and things are back to my normal routine.

I’ll be taking a two-week break from Isaiah. We’re going to see a grandson graduate from high school, and spend some time with the family we rarely get to see.  I will probably be doing some travel-type posts, but nothing serious for this period of time.

I want to thank so many of you, faithful readers and commenters, for encouraging me along the way. You make the study and the writing worthwhile.

Isaiah 43: 2-4. “When thou passest through the waters, I will be with thee; and through the rivers, they shall not overflow thee; when thou walkest through the fire, thou shalt not be burned; neither shall the flame kindle upon thee. For I am the Lord thy God, the Holy One of Israel, thy Savior: I gave Egypt for thy ransom, Ethiopia and Seba for thee. Since thou wast precious in My sight, thou hast been honourable, and I have loved thee: therefore will I give men for thee, and people for thy life.”

Notice that God never says He will prevent His people from having to endure troubles and trials. He says He will walk through those trials with them. He promises that they will not be consumed by the trial.  Even in death, a believer looks forward to being with the Savior.

For a discussion of ransom and redemption, please go back to yesterday’s post. You can find it at the bottom of this post; just click on the arrow pointing backward with the title “Reassurance.”

When you consider the trials that Israel has endured down through the centuries, including the last century when Hitler made an open and persistent effort to wipe the Jews out of existence,  it is clear that God has kept His promise to His people.  Keep in mind that He does so not because they are good, but because He is good. He is a God Who keeps His promises, even when His people forsake theirs.

Isaiah 43:1.”But now thus saith the Lord that created thee, O Jacob, and He that formed thee, O Israel, Fear not: for I have redeemed thee, I have called thee by thy name:  thou art Mine.”

This verse is the beginning of a passage I have love for many years.  It is tender, reassuring, beautifully promising Israel that even though she is about to go through a period of chastisement, God has not forgotten her.  He loves Israel.  Israel belongs to Him.

These verses (1-7) are not yet fulfilled. They speak of the end times, and especially the Millennial Reign of Messiah.

The terms Israel and Jacob are used of all 12 tribes in this chapter. The two tribes of Judah and the ten tribes of Israel are all included.

The word redeem means to ransom with a price in other places in scripture.  Here, though, it refers to deliverance from bondage without a ransom price. Deliverance from Egyptian bondage is called redemption  (Ex. 6:5; 15:13). Where a specific price is paid, the idea of redemption also includes deliverance from danger, oppression, and captivity.  So, when God gave Egypt, Ethiopia, and Seba as a ransom for Israel it means that His people were delivered from destruction, and these other countries were destroyed instead. The idea is that either Israel or these countries would perish; so God chose to save Israel and destroy them–they stood instead of Israel for a ransom. this applies more particularly to the future when Israel will be preserved from the Antichrist and these countries will be subdued and taken over by him (v. 3-4; Ezek. 38:5-7; Dan 11:40-45; Matt. 24:15-22; Rev. 12:6, 14).

Isaiah 42:23-25. “Who among you will give ear to this? who will hearken and hear for the time to come? Who gave Jacob  for a spoil, and Israel to the robbers? did not the Lord, He against Whom we have sinned? for they would not walk in His ways, neither were they obedient unto His law. Therefore He hath poured upon him the fury of His anger, and the strength of battle: and it hath set him on fire round about, yet  he knew not; and it burned him, yet he laid it not to heart.”

All down through the ages since God created man, we have decided over and over again that we want to be like everyone else and do what everyone else is doing. God, Jehovah, warns His people countless times that if they persist in disobedience, there will be terrible consequences; they will be conquered, taken into captivity, destroyed.

When that happens, our natural tendency is to once again shake our fists in His face, demanding to know why a so-called loving God can allow such horror to happen to people.

If people had only heeded His warnings, his supplication that they return to worship of the one true God, calamity would have been avoided. We don’t, however, want to acknowledge that. We want to be able to go our own way without suffering any consequences.  We want God to conform to our ideas of what is good; we do not want to conform to His holiness and truth.

We forget that He is Jehovah.  Just as Israel forgot, we forget. And then, when calamity strikes, we rush to our churches to pray and to sing God Bless America without  taking any thought as to why we are dealing with calamity.

We want Him to give us His blessing without our giving Him our obedience.

Isaiah 42: 21-22. “The Lord is well pleased for His righteousness’ sake; He will magnify the law, and make it honourable. But this is a people robbed and spoiled: they are all of them snared in holes, and they are hid in prison houses: they are for a prey, and none delivereth; for a spoil, and none saith, Restore.” 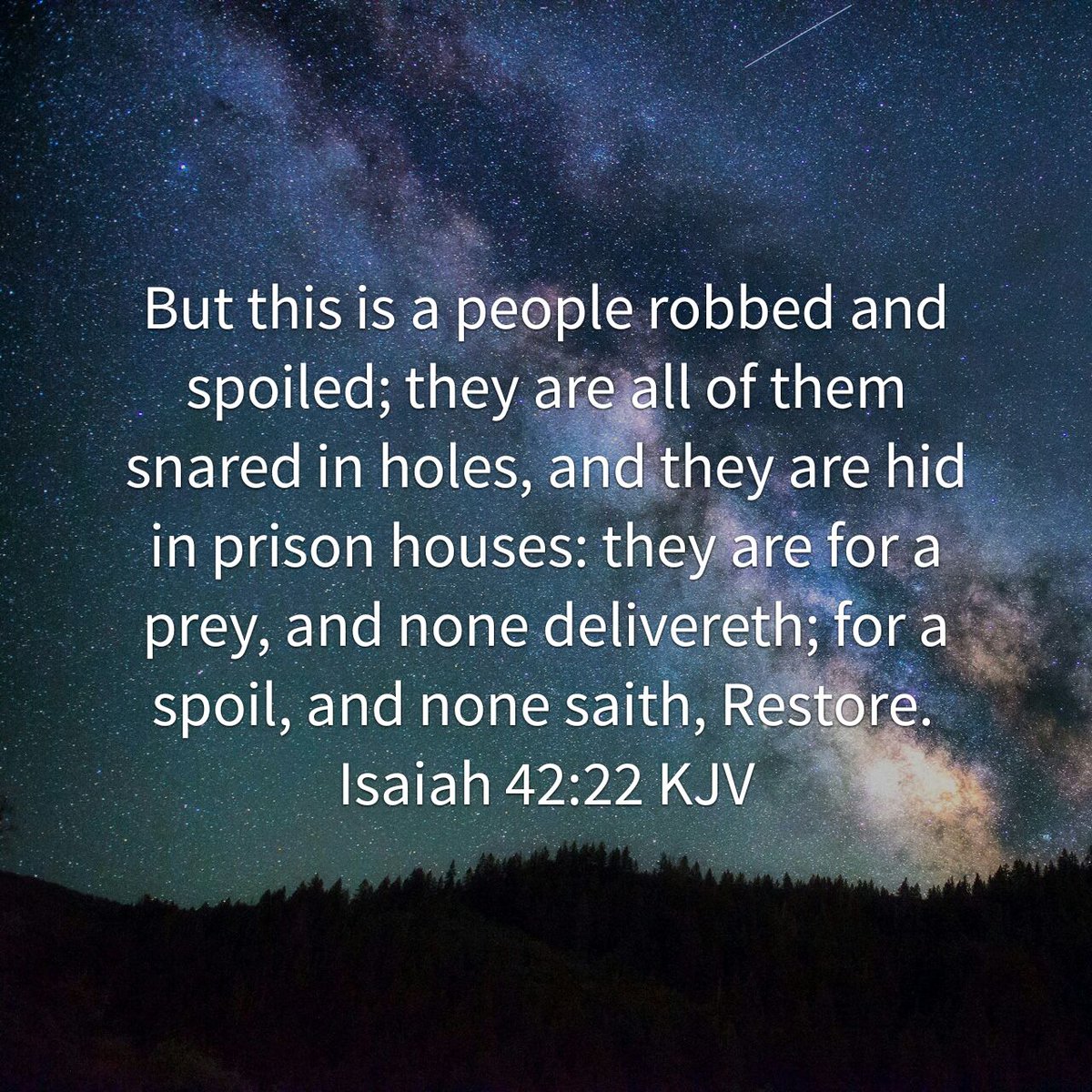 If you didn’t see yesterday’s post, I strongly recommend you go back and read it before reading today’s post. You can follow the “back” arrow at the bottom of this post to find it.

Isaiah is warning Israel, over and over, that there will be consequences for their turning away to worship the idols of other nations. A time of captivity and destruction is coming, and there will be no escape.

Those who refuse God’s law have no champion to deliver them from defeat or demand that their enemies restore the spoils they have take from the people.

Tomorrow’s post will detail the reasons for God’s chastisement of His people.