I’m giving myself the weekend off, so I’ll see you all again on Monday. Wishing you a warm and wonderful Christmas!

Merry Christmas! As we honor the birth of Jesus Christ, may we humbly remember the real meaning of this day. Amidst all the wrappings and gifts and feasting, the laughter and time set aside for family, may we never lose sight of the reason: Christ, the Savior, is Born!

Saturday morning.  I’m changing all my headers, as I do every month.

I love July.  I’ve always thought it was very cool to have a birthday on the 4th, and this year I’ll be hitting 70!

The Fourth of July is a wonderful day for America. We take the day off for picnics, parties, parades, and fireworks in celebration of the birth of a new nation, independent of any controlling forces except our own elected Congressmen.

I’ve always thought that the Declaration of Independence was poetic in its language:

When in the Course of human events, it becomes necessary for one people to dissolve the political bands which have connected them with another, and to assume among the powers of the earth, the separate and equal station to which the Laws of Nature and of Nature’s God entitle them, a decent respect to the opinions of mankind requires that they should declare the causes which impel them to the separation. We hold these truths to be self-evident, that all men are created equal, that they are endowed by their Creator with certain unalienable Rights, that among these are Life, Liberty and the pursuit of Happiness.—

Of course there is much, much more.  It is a wonderful document, unique in its inception, and created by a consensus of some of the most brilliant minds in our history.

As I read over the entire document before posting this, I was impressed again at the moral courage and dedication it took for the signers to go public in their desire to throw off the control of the British government, and  the taxes and regulations that came with it. Some of the signers lost their health, their wealth; some spent time in prison; some suffered beatings and attacks on their families; some died for the “treasonous” act of putting their names to this document. 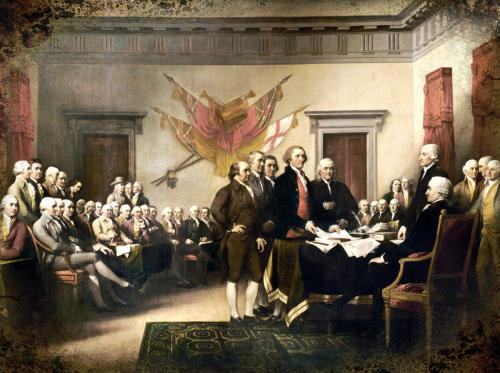 When I finished reading, I prayed as I often do: “Heavenly Father, let us never forget how this nation was conceived, founded, and built to provide a place for freedom for all; freedom to worship as we choose, without imposing our faith on others against their will; freedom to speak our minds without fear; freedom to work and to thrive by our own efforts. Help us to be thankful for the freedom we still have in this country, even as it is being eroded by our own comfort and laziness, to educate ourselves and be cognizant of those who would destroy us for their own gain. Protect us from those who would change our beloved country into something governed by religious zealots, bigotry, and hatred that aims to control us in every detail of our lives. Give us a spiritual revival, Lord,  before we become too weak to stand in our own defense.”

As you enjoy this holiday weekend, take a few moments to remember our history, and to thank God for the privilege of living in America.

As most of you know, I’ve been pretty much housebound for the last 2 1/2 months because of my ancient and crumbling back.  Last Sunday morning was the first time I ventured out to church  in all that time.  Last night a sweet friend who lives nearby was so kind as to drive me to the annual women’s Christmas fellowship. This is always a delightful gathering, and last night was no exception. 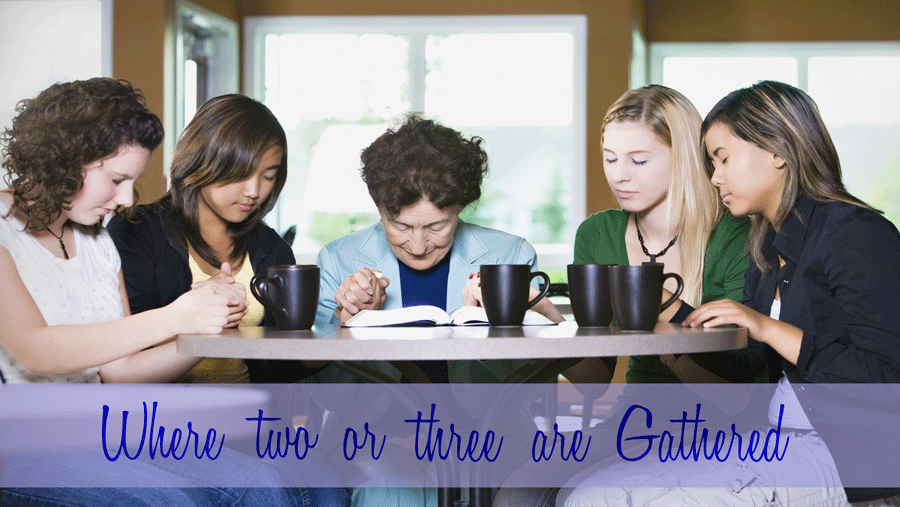 My daughter was the hostess. She always decorates her home beautifully at Christmas, so it was the perfect setting. There were maybe 35 or so women there.  We sang, enjoyed a gift exchange of Christmas mugs. We were blessed to hear a missionary speak to us about how to talk to others about the Lord. We had yummy cookies and cocoa, coffee, or tea.

And we had lots of fellowship. I was enjoying talking with a couple of other women, but at the same time, I was observing little groups scattered throughout the family room, kitchen, and front living room/dining room area, all visiting, laughing, and enjoying each other. Sometimes the conversations were serious, too.

One thing I’m sure of:  No one was engaged in gossip or complaining. It was a totally upbeat gathering, women seeking out the friendship and companionship of other women.

Many welcomed me from my long exile, and expressed that they were praying for me and would continue to do so through my January surgery.

God’s Word tells us that where two or three are gathered together in His name, He is there. His presence was definitely there last night.

So I had to say goodbye to two of my sons and their families.  Again.

Ken and his family left on Saturday morning, after tearful hugs, assurances of love, wish you didn’t have to go. We did a repeat performance on Sunday morning with Mike’s family. As they filed out the door, I remembered all the times Terry and I said good bye to my mom and dad, or his,  after a visit.  Everyone tried to be cheerful.  No one wanted to make it any worse than it really was.  But I knew very well that when our car pulled out of their driveway and disappeared down their street, my mom would get very busy cleaning, and Dad would find a reason to go to his study.  Terry’s mom would also deal with her tears in a frenzy of cleaning.  His dad would most likely go down to his painting studio and putter, maybe working on a design for a new sign.

We hated the leaving, but we sure enjoyed the arriving. The trouble is, you make a trip like that with the knowledge that there will have to be a goodbye.

Sometimes I get very jealous of my friends whose families never moved out of the area.

That’s not the way it has turned out for us.  Only one of our four children lives about 30 minutes away.  I wish I knew my other grands as well as I know the ones we see regularly.

These wrenching goodbyes help me to understand my mom better, although I think I really did understand her pretty well.  It’s just that the generations pass away, and suddenly you find that you are the grandparent standing at the door waving, tears rolling down your cheeks, as a carload of precious family members pulls out for their long drive home.

It seems impossible.  I am the same age now as Mom was when Dad died.  That still startles me when I think of it.

I find I’m thinking about time a lot more than I used to. When your children’s children are adults, or nearing adulthood, you yearn for more little ones to balance things out—and I suspect it won’t be terribly long before we become great grandparents, if the Lord tarries.

I guess I don’t really have an ending point here.  Just sharing my thoughts and my heart as we wrap up this Christmas season.  It’s been a good one, one of the best. 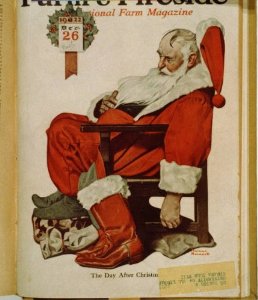 It always goes way too fast.  We had a perfect day yesterday at my daughter’s house.  She is an amazing cook, and presented us with  a beautiful and delicious feast.

It was fun to hear the teens and younger kids at a table in another room, having so much fun together.  All nine of my grandchildren together for Christmas happens only once in maybe three or four years, but they all seem to enjoy reconnecting. 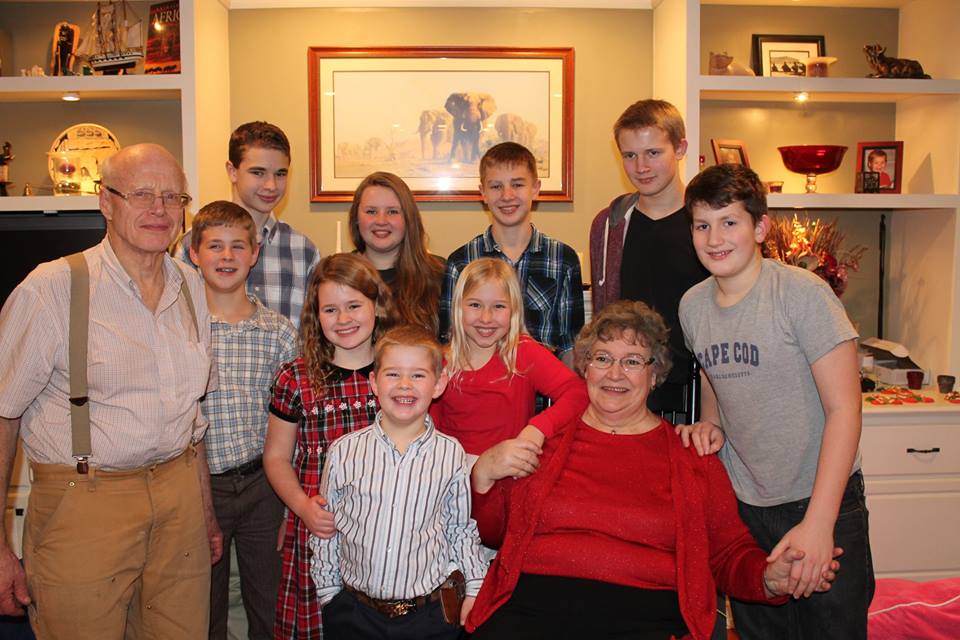 Later, a family from our church joined us for dessert, and we enjoyed singing carols together.  Lots of musical talent in our family and theirs.

My South Dakota crew left around 8:30 this morning.  It’s always so hard to say goodbye.  The Germany family will be up soon.  They’re going to an Eagles game tonight, will come back here to sleep, and then journey through Virginia to South Carolina to see friends and then my daughter-in-law’s family.

I’ve done very little cooking this week. My South Dakota son is turning into quite a chef, and he treated us to some wonderful meals. I’ve been thoroughly spoiled.

It’s certainly been a Christmas to remember.  We are thankful.

Merry Christmas to all my blogging friends,  to all the readers who have blessed me with your faithfulness, to family and  friends all over.  May we not forget the reason for this day.  Jesus is everything. 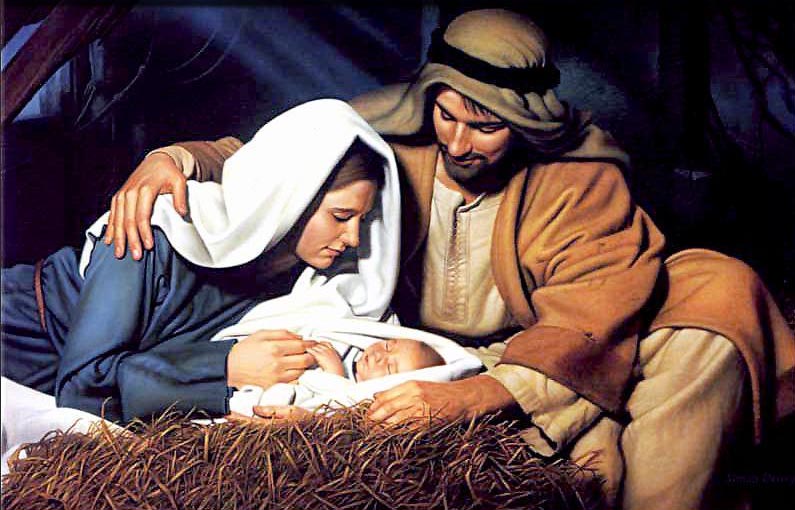