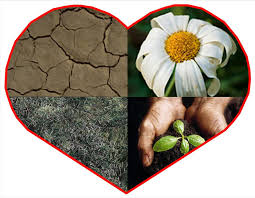 The rocky ground is lightly covered with earth.  Here in my part of Pennsylvania, we are abundantly blessed with rocks.  We even have Ringing Rocks State Park, which is exactly what the name implies.  Throughout  the central and northern parts of this country, rocks grow like weeds.  Many fences are built with rocks.  We have stone houses, stone barns, cobblestone streets.  If you want to have a field that is tillable and productive, you have to pick the rocks. That way, the soil is deep enough to give appropriate room for growth and nourishment.

However, some soil is just too rocky to bother with. The seed that falls on this soil isn’t going to survive, because the thin layer that covers the rocks just isn’t enough to firmly root the plant. The plant will spring up quickly, but the heat of the sun will burn it up.

There are those who hear the gospel, and respond to it with great enthusiasm at first.  They may look really good for a short time.  However, when the heat rises and the trials of life come along, it is obvious that there is nothing but solid rock under the soil, where no plow has ever been and in which no life is present.

This is the great population of professing Christians who are not rooted and grounded, and who not only bear no fruit, but who die under the heat of the sun. These are they who were “born Christians,” who were perhaps baptized as infants but who never received the gospel of Christ into their hearts; they claim the Name of Jesus Christ, but they don’t really know what it is to be born again.  They are practicing the forms of Godliness, but they do not know of its power.

When trials come, when persecution rears its ugly head, these Christians in name only will have no firm roots to take them through it. All the outward show of godliness will not stand up under the brutal heat of trial.