People everywhere are commanded to hear and acknowledge God’s acts and power. The passage goes on to name the classes of people to be punished by God:  Sinners in Zion, who are afraid; hypocrites who are surprised with fear of everlasting fire.

Then the question:  Who is going to be able to escape the wrath of God?   The time of reckoning  draws near, and all who have held themselves as above reproach, above sin and its results, above God Himself, will realize that there is no escape for them.

The next few verses will tell us who will escape, though. God always leaves the door of hope open.

16 But the Lord of hosts shall be exalted in judgment, and God that is holy shall be sanctified in righteousness.

17 Then shall the lambs feed after their manner, and the waste places of the fat ones shall strangers eat.

Sin always takes us farther than we intended  it to. Once we have taken those first steps, it is very hard to turn around and go the other way.  And sin replaces God.  The sin becomes that which we worship.

God, however, does not let Himself be displaced. There always comes a time of confrontation, whether it is personal, church-wide, or nation-wide. If the hearts of believers turn to God, unbelievers will come to Christ, and there can be a revival!

When we persist in our sin, then God brings judgment. When He does, He will be exalted, sinners will be humbled, and others will enjoy the fruits of our labor. It’s called “the spoils of war,”  The winner takes everything, and the loser is brought to nothing.

Galatians 2:17-18. “But if, while we seek to be justified by Christ, we ourselves also are found sinners, is therefore Christ the minister of sin?  God forbid. For if I build again the things which I destroyed, I make myself a transgressor.”

Paul’s legal training shows up in these two verses. They are  classic “If. . . .then”  statements, showing the fallacy of combining grace with the observation of the law to attain salvation.

“if,” says Paul, “while we seek to be justified by Christ, we ourselves also are found sinners”–in other words, if we who have trusted in Jesus alone are still sinners seeking a way of salvation–“Then Christ is the minister of sin.”  Is that all Christ was for? Was He only to show me how bad my sin is, how lost I am, and then leave me to save myself by my own efforts in keeping the Law?

God forbid! Christ came to be a minister of righteousness to all who believe. How futile would His death have been if it were only to show me how bad my sin is and not provide me with a way of salvation beyond my own efforts!

“If I build again the things which I have destroyed”—If I, Paul, insist upon the Gentiles’ observance of the Law, which I have proved to be abolished by the death of Christ (Eph. 2:14-15; Col. 2:14-17 and many other references) then I am rebuilding what I have taken down, making myself also a sinner by undoing my own justificiation by faith in Christ.

I had to read these verses over several times, and study a couple of my references, to be sure I have a clear understanding of what Paul was saying.  When it fell into place for me, I realized how beautifully simple it is.

Thank God for His grace to us!

What does Paul mean when he says “We who are Jews by nature”?  He is talking about those who, like himself, were born  of Jewish parents and are descendants of the Jewish nation. They grew up hearing of God and His mighty works and power.  They learned the Law from childhood. They were not like the Gentiles, who did not grow up in the Jewish tradition.

Both are saved by grace through faith.  Jewish sinners, Gentile sinners?  It doesn’t matter. Jesus died for all sinners.  There is no difference to God between the Jew and the Gentile, the bond and the free,  male or female. The blood of Jesus Christ was shed for all. Period.  Salvation for all is by grace through faith, believing in Jesus Christ as the only Son of God Who came to die that we might live.

The only justification with God is through the blood of Jesus.

Matthew 26: 42-43. “He went away again,and prayed, saying, O My Father, if this cup may not pass away from Me, except I drink it, Thy will be done.  And He came and found them asleep again, and prayed the third time, saying the same words. Then cometh He to His disciples, and saith unto them, Sleep on now, and take your rest; behold, the hour is at hand, and the Son of man is betrayed into the hands of sinners. Rise, let us be going: behold, he is at hand that doth betray Me.”

Twice more, Jesus went off to be alone with the Father, repeating His prayer and submitting to the will of God. Twice more, He went back and found the disciples deep in slumber.  The third time, He did not scold them, but told them to rest while they could, because the hour of His betrayal was at hand. He was fortified by the prayers  He had made to the Father; He was ready to accept what was coming.

Judas had done his work. Jesus was about to be identified and betrayed, as He said, into the hands of sinners.

Let’s not overlook the importance of those  words.  The ones who would come to arrest Him were the chief religious leaders and big shots of Israel.  They were men of power and authority, who expected to be given the best seats at a party. The expected the rabble that they so detested to bow before them and be humble in the presence of such august power.

They considered themselves to be better than others.

And Jesus said they were sinners.  Just like everyone else.

Matthew 9:12-13. “But when Jesus heard that, He said unto them, They that be whole need not a physician, but they that are sick. But go ye and learn what that meaneth, I will have mercy, and not sacrifice: for I am not come to call the righteous, but sinners to repentance.“ 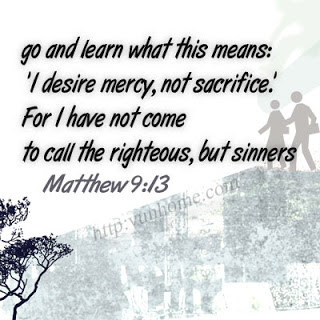 At this point in His earthly ministry, Jesus took every opportunity to shake up the status quo. He didn’t rant and rave.  He didn’t need teleprompters and half a dozen speech writers to know what to say. Usually, He made His point using very few words. That’s exactly what happened here.

Jesus heard the Pharisees asking some of His followers why He was eating with sinners. He replied promptly, before His disciples could be put on the spot. He said that, like a physician who comes to heal the sick and not the healthy, He had come to call sinners to repentance, not those who were already righteous.

I have thought about those words quite a bit during the last couple of days.  What do we discuss when we get together for fellowship with others who already share our faith?  Ideally, we talk about the things of the Lord, right?  But how often does our conversation degenerate to discussing how awful the unsaved are?  How godless, how immoral our society has become?  It is even worse when we start down the path of excoriating other believers who, perhaps, do things differently than we do. What I’m really wondering, though, is how much time we spend discussing how to reach the lost?  How much time in praying for the efforts of our missionaries?  How much for the church calling program, if such a thing still exists anywhere?  There are churches who run what they like to call “outreach” activities.  They hold carnivals, bake sales, spaghetti dinners; they show movies and offer free widgets and all other sorts of things to draw people into the church. Lots of money can be spent on these outreach efforts, and lots of people give lots of time to making these efforts successful.

Would these same people be willing to pass out tracts  somewhere?  To witness personally, face-to-face with someone they’ve never met? Even to spend time each week going to the homes of people who have visited their church, and getting to know them?  Inviting them into their own homes?  Offering them Jesus Christ? Or is it easier to have dunk tanks and hot dogs?

Okay. That’s my rant for today.

After Jesus made His first statement, He said something truly shocking. He said to the Pharisees, of ALL people, that they needed to go and learn what He meant when He said “I will have mercy, and not sacrifice.”  He was referencing at least two OldTestament scriptures: Hosea 6:6 and I Samuel 15:22. From these two passages, it is clear that what He meant was this:

I desire acts of mercy on your part rather than showy sacrifices.  If your religion makes you feel and look exalted and self-righteous, and you consider yourself  to be defiled by associating with sinners, then your sacrifices are just so much sound and fury. To obey is better than to sacrifice. You need to read Micah 6:8, which teaches you that I have required only that you do justly, and love mercy, and walk humbly with Me.

Jesus never said anything that was frivolous or meaningless.  There is such wealth to be mined from His every word.

The next scene we see is Jesus in the house of Matthew (Mark 2:14-17), eating with other tax collectors and sinners.  Jesus has chosen to accompany Matthew to his house, where a meal is prepared and served to what was probably a pretty good number of disreputable people. They probably did not sit on benches or chairs, but reclined around the table, as was customary.He Who had come to seek and to save that which was lost declared Himself, by this action, to be completley comfortable having fellowship with social outcasts.

Now think!  This was the One Who owned the universe; the One Who had created all of it and had the power of forgiveness and healing. What a picture of grace this is!  I wonder if any of us would be so comfortable to sit down and eat with people who were definitely not on the “A- List” of the social leaders of the day.  No red carpet here, no hordes of people waiting to catch a glimpse of celebrity.  Just a bunch of  social pariahs who knew they were welcome in Matthew’s home and who had heard of his startling departure from his tax collector’s table to follow the Nazarene.

They very likely gathered in a courtyard, open to the gaze of passers-by.  And before long, here came the Pharisees, the Hector Inspectors of the realm, to see what was going on at Matthew’s house–to which they had not been invited.

So they asked His followers why their Master was eating with the rabble.

Tune in tomorrow to see what Jesus said.