Matthew 27:33-37. “And when they were come unto a place called Golgotha, that is to say, a place of a skull, They gave Him vinegar to drink mingled with gall: and when He had tasted thereof, He would not drink. And they crucified Him, and parted His garments, casting lots: that it might be fulfilled which was spoken by the prophet, They parted My garments among them, and upon My vesture did they cast lots. And sitting down they watched Him there: and set up over His head His accusation written, This is Jesus, the King of the Jews.” 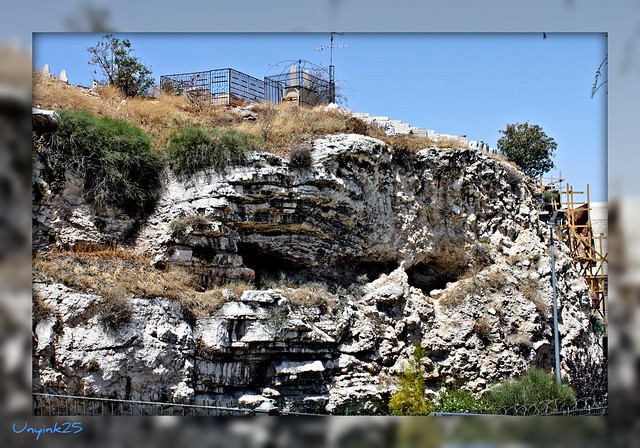 There is some debate as to the actual place of the crucifixion of Jesus.  This rock formation has some resemblance to a skull, and some do believe it was at the top of this formation that He was crucified. There is another tradition that Jesus was crucified at calvaria, The Skull, where tradition has it that Adam was buried and his skull was found there.

It doesn’t really matter very much beyond being a point of interest.

The soldiers offered him a drink of vinegar mixed with gall. This was  a drugged mixture that  was used to alleviate to some small degree the suffering of the victim. When Jesus tasted it, He refused to drink. He had to drain the bitter cup of sin completely, and it wasn’t time yet for Him to accept the brew.

It is notable that none of the gospels spend a lot of time on the actual act of crucfying Him. Matthew simply says, “And they crucified Him.” I’m going to have more to say about this process in another post, but I don’t really want to spend a lot of time on exactly what happened to a victim of crucifixion. What matters is that He suffered horribly; that prophetic scripture was fulfilled many times during this whole process; and that  it was done in obedience to the Father, and for our sake.

Psalm 22:18 describes the gambling for His garments. Isaiah 53 draws a clear picture of His suffering. I don’t have the time or space to detail every single prophecy that was fulfilled. Perhaps in a different kind of study, but not here.

The sign over His head proclaimed the legal reasons He was executed:  He claimed to be the King of the Jews, the Son of God.  Both Rome and Israel were offended by such claims. Rome would tolerate no king other than the emperor. Israel would not accept His claim that He was the Son of God.

And so they crucified Him.