Paul, an apostle of Jesus Christ by the will of God, and Timotheus our brother,

To the saints and faithful brethren in Christ which are at Colosse: Grace be unto you, and peace, from God our Father and the Lord Jesus Christ.

Our practice today is to put our names at the end of a letter. In Paul’s day, it was normal to identify oneself in the formal greeting at the beginning of the letter. Makes sense to me 🙂

Paul states his authority for writing to the Colossian church: By the will of God, he was an apostle. The strict meaning of apostle is “one sent,” with the idea of being called to a special purpose. The other of the apostles had seen the living Christ during His ministry on earth. Paul had been gifted with a heavenly vision of Christ as he traveled on the Damascus road, seeking to persecute believers (Acts 9 and 26).

There are many paintings of that scene, which of course are all drawn from imagination. I like this one because it was indeed a dramatic moment, shocking to all who were present. It was the event that changed Saul the Persecutor to Paul the Apostle.

Paul mentions Timothy in his greeting. There is no indication that the much younger Timothy had a part in composing the letter. He was there to comfort Paul in his imprisonment, and perhaps acted as the amenuensis, or scribe, for Paul’s words. We really don’t know. We know only that he was there with Paul.

Paul continues his greeting, calling the recipients of his letter “saints and faithful brethren.” We don’t know what Epaphras may have told Paul, but it would seem from this greeting that there were those in the congregation who truly looked for truth, and wanted to live out their faith as God would have them to.

Then, as was typical, Paul blesses them with the hope of grace and peace sent from God.

Wouldn’t it be heartwarming to receive a letter that started this way? Of course, our written communications these days are generally email or texts, but still. Old-fashioned letters need to make a comeback. They offer the time and space to write much more thoughtfully and deeply than a quick e-communication does. Paul’s letters have stood the test of time. I don’t think our texting will do that.

There are other scriptures that enumerate these and more spiritual gifts, but Paul’s emphasis here is on gifts that were given specifically for the establishment of the Church (apostles and prophets) and the continuing growth of the Church (evangelists, pastors, teachers).

The apostles had the work and the privilege of building the foundation on the Cornerstone, Jesus Christ.  They preached powerfully of the risen Christ, and people came in crowds to here them and to be baptized and added to the Church.

Today’s prophets are not those who foretell the future; instead, they are those who are gifted with a strong ability to interpret and clearly explain the scriptures.   I’ve had some remarkable prophets during my lifetime, including my own father. He was a very good teacher who could take the hard things of the Word and make them understandable.

Evangelists, pastors, and teachers are gifted to continue the work of building up the Church, of edifying the people, of continuing the work of sharing the gospel so that people will come to a saving knowledge of Jesus Christ.

The evanglist is a “bearer of glad tidings.”  His work is aimed more at the world outside the church. He preaches to the lost, although believers are often rekindled to be more active in their witness to the lost when there are evangelistic services in the church.

The word pastor means shepherd. It is actually a very tender gift, and a great blessing to the people whose shepherd truly has a pastor’s heart. Not all  who call themselves pastors were called or gifted by God for that ministry. Some cause a great deal of pain because of their lack of compassion, their determination to build their own name and legacy. A shepherd lays down his life for his sheep.  He cares for them tenderly, and is greatly loved by those to whom he ministers.

This is an interesting subject, and there have beeen many good studies written on the topic of the spiritual gifts. The main thing for us is to remember that these gifts were given for the building up of the Church, ministry to the lost, and ministry to one another.

Ephesians 6:1-2.  “Paul, an apostle of Jesus Christ by the will of God, to the saints which are at Ephesus, and to the faithful in Christ Jesus:  Grace be to you, and peace, from God our Father, and from the Lord Jesus Christ.” 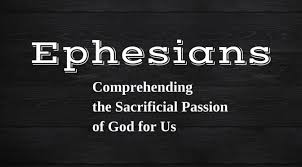 Several noteable things always appear in Paul’s greetings to the recipients of his letters.  The custom of the day was to identify oneself at the very beginning of the letter, adding whatever information the writer felt important.

So the first thing Paul states is his apostleship by the will of God. Why is this important?

The original twelve were all men who actually walked with Jesus during His ministry on earth, so one requirement of apostleship was that one must have actually physically seen the Lord.

Paul did. His experience is different from the rest of the apostles, and you can read about it in Acts 26, and especially verse 16.  He was chosen by God to be the Apostle to the Gentiles.

Next, Paul clarifies that he is writing to believers. The saints were those who had accepted Jesus Christ as their Savior, and had already heard the gospel of salvation. He was not addressing a different group when he said and to the faithful in Christ Jesus. The saints and the faithful were one and the same. All Paul is doing here is recognizing the faithfulness of the believers at Ephesus.

Now, in verse 2, we have the apostolic salutation.  In a letter we might write today, we might say, “Dear  Susan,” or some other such standard greeting.  Paul offers them grace and peace from God, Who is their Father; and from the Lord Jesus Christ, Who is His Son. This is not saving grace.  They already had that.  Rather, it is the grace to meet each day, and the grace of knowing our names are written in the Lamb’s Book of Life.

So often in this Godless culture we hear the plaintive notes of the wonderful song Amazing Grace, how Sweet the sound that saved a wretch like me!  I once was lost, but now am found; was blind, but now I see.” And every time I hear it used at the funeral of some celebrity, politician, or otherwise famous person, I wonder.  Did the deceased have any true idea of what it is to be saved by grace?  To live in grace?  To have dying grace, and to look forward to eternal grace?

It is a sad and solemn thing to me that we have used this beautiful song with so little thought.

Similarly, to have peace with God is to know one’s sins are forgiven, and that eternity in heaven is secure. It is to be in right relationship with Him, and to look forward to the day when we see Him face to face. It is peace in the good times and the hard times, an inner peace that passes all understanding.

Isn’t it amazing, all that Paul has to say in two short verses? That’s because it was the Holy Spirit leading his thoughts and his pen.

How could Paul Say what he did in this verse?  If I may paraphrase, he is saying, “I really don’t worry about these men who seemed to be such hot stuff; it doesn’t matter to me.  God is not impressed with our own boastfulness about how important we are.  Even though they seemed to be something during our conferences, they had nothing to add to what I know and preach!”

So who did he think He was?  After all, hadn’t he persecuted the church with great zeal?  And now here he comes, strutting his stuff as if God spoke to no one else but him!

Can’t you just imagine the huffing and puffing?  The Judaisers considered their doctrine and their importance to be great, because they were upholding the Law, the Torah, and tradition.  Sure, they said they believed in salvation by grace, but you still had to observe the Hebrew feasts and so on if you really wanted to be safe.

And now here comes this nobody, this upstart who wasn’t even a real apostle, telling them all that they were full of hot air.

How could he say they meant nothing to him?  Well, because the gospel he received was received directly from God, that’s why. It’s what made him a “real” apostle; along with the fact that he actually did see the risen Savior in his vision.  The other apostles in Jerusalem confirmed God’s hand of blessing on Paul, and accepted him as the real thing. And he was. No doubt about it.

Galatians 1:1. ” Paul, an apostle, (not of men, neither by man, but by Jesus Christ, and God the Father, Who raised Him from the dead).”

When we write letters today, we always greet the recipient by name in the first line of the letter.  In Paul’s day, it was appropriate letter-writing etiquette for the writer to identify himself in the first few words.  What we need to pay attention to here is that Paul calls himself by name, and then uses the appositive “an apostle.”

Paul used this identification only when his apostleship had been called into question by the recipients of the letter he was writing; or, when he is about to expose some great, important doctrine that would probably not be accepted unless  the people understood his commission by God to make it known. Otherwise, Paul introduced himself as a “servant of Jesus Christ,” a bondsman, one who was bought and paid for.

The word apostle means messenger, minister. In this case, however, Paul needed to identify himself as legitimately  connected to the twelve who  were the apostles specifically to the Jews, and later the Gentiles.

Paul was not made an apostle by the appointment of men. He said his apostleship was given to him by Jesus Christ and God the Father. We can read of Paul’s conversion and appointment by God in Acts 26 when he is allowed by Agrippa to speak in his own defence. He describes his experience, starting specifically in 26:13, when he is visited by God upon the Damascus Road. It was quite a dramatic event, and it changed the course of his life. In verse 16, God says, “But rise, and stand upon thy feet: For I have appeared unto thee for this purpose, to make thee a minister and a witness both of these things which thou hast seen, and of those things in the which I will appear unto thee.”

I encourage you to read the whole account.  It is indisputable that Paul saw Jesus; that Jesus spoke to him directly, appointing him to the ministry of apostleship.

Why, in Gal. 1:1, did Paul mention God, Who had raised Jesus from  the dead? One of the requirements of apostleship was that the person must have seen Jesus Christ in person, alive. Those who doubted Paul claimed that he had not seen Jesus when He was ministering here on earth, and so could not truly be an apostle.  The claim is put to rest by Paul’s reminder to them that he had indeed seen the risen Christ there on the Damascus Road.

Isn’t is amazing how much is packed into one short verse?