Seems to me I’m hearing a lot about the importance of forgiveness these days.  Nothing wrong with that.  God knows we need to get hold of the concept, practice it, teach it to our children.  But it’s being talked about as if no one ever realized until now just how important it is, and that’s amazing to me.

I’m afraid we didn’t do a stellar job of teaching our own kids how to forgive and accept forgiveness, and neither did my parents.  I had to learn it the hard way, after I was all grown up and should have been past the anger and bitterness that accompanies an unforgiving spirit.  Someone has said that withholding forgiveness is like drinking poison and hoping the person who hurt you will die.

There is a ton of bitterness that walks into my office.  People are so hurt, so angry, so bitter.  They are locked in a prison of their own making because, even when they think they have forgiven, they have failed to go past the words “I forgive you,” not making application of those words in their attitudes, actions, and relationships. They often do not understand that failing to truly forgive one person will spill over into all their other relationships like radioactive fallout, slowly eating away at their lives until they find themselves alone and lonely, and not understanding why.

That is when the 100% words come into play. “No one understands me. Everyone is against me. I always get the shaft. I never seem to come out on top. ”

In Ephesians 4:32, Paul wrote, “Be ye kind one to another, tenderhearted, forgiving one another, even as God, for Christ’s sake, has forgiven you.” 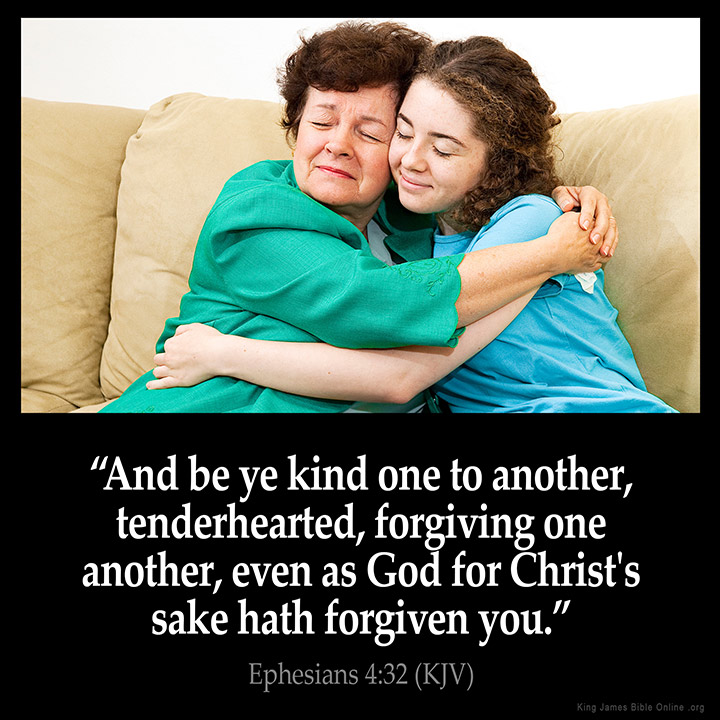 I had to learn that forgiveness was really between God and me, and not necessarily between me and the person(s) who hurt me.  Often, the person against whom we hold bitterness is blithely unaware–or chooses to be unaware–of the pain we suffer.  Confronting the offender is often impossible because he/she is already dead; or the distance is too great.  Perhaps you really don’t want the person in your life, and that’s okay as long as there is very little chance of you ever being together in the same place at the same time.  You don’t have to confront someone face-to-face in order to forgive him. Just understand that as long as you withhold forgiveness, that person is still controlling your emotions.  It simply doesn’t make sense to allow that to continue.

Forgiveness is a process, not an event.  You may finally come to a place of brokenness before God, and you choose to release the offender from the debt. You choose to give up your right to demand justice. You are relieved, released, and rejoicing.  And then, WHAM!  out of nowhere, a memory comes flooding back along with all the emotions, and you’re floundering, drowning in discouragement because you thought you had settled it.

That’s when you have to forgive again, seventy times seven, as long as it takes.  What I have learned is that the more often you learn to quickly forgive again, as time goes on, you will need to forgive less and less because you are practicing forgiveness. After a while, you get pretty good at it.  The painful memories come less frequently, and when they do arise like snakes from under a rock, you kill them before they have a chance to poison you again.

Does forgiving someone mean that he gets away with whatever he did?  Does it mean you have to continue to tolerate abuse?  No, and no. The offender will answer to God unless he seeks forgiveness.  As for tolerating further mistreatment, no, of course not. Abuse is never acceptable.  We all need to establish boundaries that, if crossed, will result in the loss of an active relationship. These boundaries need to be made clear to the person who has invaded your space before, treating you with condescension or cruelty. No one has to accept that.

We do have to accept, however, that some people seem to just be incapable of changing their behaviors, ignoring your boundaries. They are so full of themselves that they cannot–will not–acknowledge that you have a right to set your own boundaries.

You don’t have to accommodate their obtuse arrogance. Stay away. There are toxic people who will drip poison into your heart and mind if they get anywhere near you, and then try to convince you that it’s all your fault. All we can do with those poor folks is pray for them, and stay away from them. Kindly. Not returning spite for spite.

So, there now.  I’ve added–once again–my voice to the many others out there who are trying to embrace, practice, and teach forgiveness as well as seeking forgiveness from those they themselves have hurt.

Remember that we are to be becoming Christlike. He is the best forgiver in the history of the world.

7 thoughts on “Forgiveness is NOT a New Concept”