Write a new post in response to today’s one-word prompt.

I do apologize.  I meant for this to be posted on my writing blog, not on this one.  That’s what happens when you don’t double check. So I’m going to re-blog this on my other blog, and then I’ll delete it from here 🙂

From the Merriam-Webster online dictionary:

The prefix syn means united, acting, or considered together; thus the name of the once popular boy band, ‘N Sync that got its start in 1995.

Chronos was the Greek god of time.  Interesting, always, where words come from.

Children are often taught to play a musical instrument, especially the piano, in time with a metronome, a mechanical device that kept a stead rhythm to help the student establish  a sense of timing.  The musical application of synchronicity is surely of the most interest to me, although I do understand its importance in hundred of other  applications.

For instance, dancing is a form of synchronous  movement. There is something just delightful in watching dancers who are in exact rhythm with each other–grace, timing, agility.

For you youngsters out there, this was perhaps the most famous Hollywood dance couple of all time–Fred Astaire and Ginger Rogers. Perfectly synchronized, always a pleasure to watch.

Singing also needs synchronicity.  A choir is an ensemble in which no one voice or singer stands out. The idea is to blend so perfectly that it would seem to be just one voice.

You probably won’t want to watch the whole concert. I used this mainly because it so clearly demonstrates what a really good choir should sound like.

And then, of course, there is synchronized swimming:

Some of you will recognize Esther William, from the 1930’s and 40’s, who became known as “America’s Mermaid.” It seems to me she did some movies that included her in synchronized swimming routines, but I could be wrong.  Long time ago. 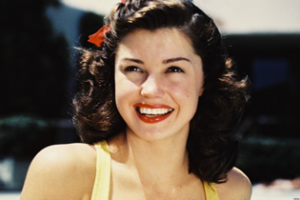 One thought on “In Time”