It’s been several days, so let me start by reminding you of the last post in this Ephesians study, which you can find here.  Jesus has put to death the enmity between the Jew and the Gentile through His sacrifice on the cross.  He has brought us together into one body through the Church, when we come to Him in repentance.

Now, the next verse is Ephesians 2: 17. “And came and preached peace to you which were afar off, and to them that were nigh.” 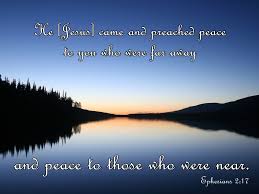 Who were those who were far away from the gospel of Jesus Christ?  Those were the Gentiles.  Very few of them had access to scripture, and the vast majority were idolaters.  Of course there were exceptions, exampled by the Magi who followed the star to seek Jesus, of Whom they had read in the Jewish prophecies.

Jesus preached peace to both Jews and Gentiles. He rejected no one. His salvation is available to all who believe, who come to Him in repentance for sin, and who seek Him as Lord and Savior.