Matthew 27:27-32. “Then the soldiers of the governor took Jesus into the common hall, and gathered unto Him the whole band of soldiers. And they stripped Him, and put on Him a scarlet robe. And when they had platted a crown of thorns, they put it upon His head, and a reed in His right hand: and they bowed the knee before Him, and mocked Him, saying, Hail, King of the Jews! And they spit upon Him, and took the reed, and smote Him on the head. And after that they had mocked Him, they took the robe off from Him, and put His own raiment on Him, and led Him away to crucify Him. And as they came out, they found a man of Cyrene, Simon by name: him they compelled to bear His cross.” 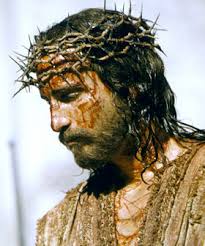 He had been beaten to a pulp. He was hideous to look upon at this point.  He had been slugged with fists, slapped with open hands, spit upon, mocked, scourged. It was amazing that He could stay on His feet.

The whole band of soldiers would have been 100 of them, centurions in the employ of Rome. They humiliated Him even more, stripping Him naked. They draped a scarlet robe around Him that someone found somewhere, put a reed in His hand, and pretended to do homage.

But that crown of thorns was another hideous form of torture. The thorns were long, sharp and strong, like nails. The evil genius who had the idea to “crown” Jesus may not really have understood the torment it would cause Him, but surely that person knew there would be pain.

The crown of thorns probably caused an extremely painful condition known as trigeminal neuralgia. The pains lacerate the face, jaw and neck, and are so extreme that the sufferer often screams in helpless agony.

And then they took the reed out of His hands and hit Him on the head with it.  It wasn’t just some wispy grass thing. It was strong enough to cause more pain to His already lacerated head and face.

After they had their fun, they put His own garment back on Him and took Him out to the place of crucifixion. On the way, they forced a bystander, Simon of Cyrene, to carry Jesus’ cross.  The typical practice was to force the condemned prisoner to carry his own cross, so it would seem that perhaps Jesus was so weakened by this time that He was clearly unable to do so.

I have often wondered about  Simon.  Did he stay around to see the final act of this horrible play? Did he have any idea what was going on, or did he think this was just another Jew being executed by Rome for some crime or the other? And how about afterwards?  After Jesus rose, did Simon of Cyrene hear of it, or even see Jesus?  If so, what would he have thought and felt?

Well.  Some things we just won’t know until we get to heaven.

2 thoughts on “Crown of Thorns”