Matthew 13: 3-9. And He spake many things unto them in parables, saying, Behold, a sower went forth to sow; And when he sowed, some seeds fell by the way side, and the fowls came and devoured them up: Some fell upon stony places, where they had not much earth: and forthwith they sprung up, because they had no deepness of earth: And when the sun was up, they were scorched; and because they had no root, they withered away. And some fell among thorns: and the thorns sprung up, and choked them: But other fell into good ground and brought forth fruit, some an hundredfold, some sixtyfold, some thirtyfold. Who hath ears to hear, let him hear.” 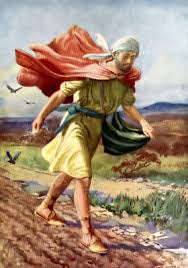 A parable is a simple, earthly story that has a deeper heavenly meaning. Jesus used parables that His listeners would recognize.  This first one, the parable of the sower and the seed, used imagery that all Israelites knew. Jeus was The Master Teacher. He always taught a new concept by connecting it with things that were already familiar to the hearers.

The Gospel of Matthew is the only one in which all seven of the mysteries are grouped together. Matthew, of course, is the great dispensational gospel, revealing God’s plan of the ages  clearly. After the kingdom He offered was rejected, Jesus made known what would happen during the time of His absence. You will remember that the number seven always denotes completeness; these seven parables are clear pictures of the complete plan of God.

First, what did Jesus mean when He said six times in these parables, “The kingdom of heaven is like”?  What was the kingdom He was teaching?  It couldn’t have been the Old Testament promise, because Israel had rejected  Jesus as Messiah. Also, He was saying things that had been hidden since the world’s foundation, so this kingdom could not have been that which had been promised and clearly described in the Old Testament.

Some teach that this new kingdom is the Church. No. The symbols and teachings in these parables are not consistent with what is later introduced as the Church, and to try to make the parables and the Church fit together is like trying to force pieces of a puzzle together when the size or the angles, corners, and links do not match.  Nowhere in scripture is the Church called the Kingdom of the Heavens.

It makes much more sense that Jesus referred to the sending of the gospel to the Gentile nations. The mercy and grace that was offered to, and rejected by, Israel would now be offered to the nations, while the King Himself would be absent.

What we will see in these parables is how matters will go in the earth while He is not here, and what humankind will do with the the gospel that is now to be sowed among the nations.

Before we look specifically at each parable,  we need to see that the seven parables are divided into four and three.  The first four are taught to the multitudes. Then, Jesus went into house and taught the final three parables to the disciples. These last three have a deeper spiritual meaning than the first four.

There is much more to be said on this topic, but I really wanted to get into the first parable today. However, this is already long enough, so I believe I will postpone that study until next time.

Do you see that no matter how much we study God’s Word, there is always more to mine out of its riches than we could ever find, no matter how long we learn?  I’m reminded of a wonderful song: