Matthe 9?14-15. “Then cam to Him the disciples of John, saying, Why do we and the Pharisees fast oft, but Thy disciples fast not? And Jesus said unto them, “Can the children of the bridechamber mourn as long as the bridegroom is with them? but the days will come when the bridegroom shall be taken from them, and then shall they fast.” 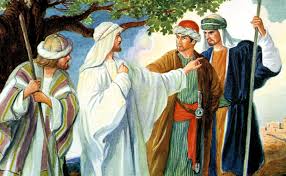 Once Jesus began His public  ministry, John the Baptist faded into the background. He still had followers, however, who apparently were watching Jesus and His disciples pretty closely.

Remember that John himself had lived in the desert and had eaten grasshoppers and wild honey.  (By the way, I’m told by some who have tried them that grasshoppers or locusts are actually quite tasty.  That’s good to know, I guess.)  Apparently John encouraged his followers to fast often; yet, here, they saw Jesus eating and drinking  with publicans and sinners.

There is no hint in these two verses that John’s disciples approached Jesus in a negative way. Typically, when someone did approach Him with ill intent, He turned the tables on them with lightening speed and left them muttering in their beards.  With this group, however, He took the time to give them a simple explanation.

In the next two verses Jesus used a simple parable to further explain Himself. Check back tomorrow to see what He has to say next.