Proverbs 22:24. “Make no friendship with an angry man; and with a furious man thou shalt not go.”

The pictures  really aren’t that funny, are they?  We talk about someone who “blows his top,” but when you think about it, that’s kind of what happens when someone allows himself to be so angry that he actually has a stroke!  Yes, it has happened!

I was looking for some pictures of real people who were having a fit of anger, but they were so ugly and upsetting that I decided to go the cartoon route instead.  Too bad we can’t do that with the people in our lives who are angry all the time–just relegate them to cartoon status! 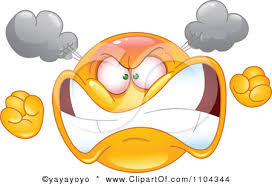 Anger is a serious concern for those who live with angry people.  The entire household is controlled by the specter of that person’s anger: “Whatever you do, don’t make Dad/Mom/Jimmy/Susie/the dog/the cat  MAD!”  Trouble is, it takes very little to trip that trigger, and sometimes we do it completely without planning  for the volcanic eruption that follows.

There’s a lot to say about anger, and for the next several weeks we’ll look into what it is to BE an angry person; what it’s like to live with one; what causes furious anger; and what can be done about it.

Today, I want to point out that anger, in and of itself, is not sin.

Are you shocked?  Well, consider this:  God’s anger is mentioned over 450 times throughout the Bible; God is without sin. So what’s the problem?  I can just go ahead and throw a fit, and that’s ok?

Well, no.  It’s not the anger that is sin.  It’s the fit.  I heard someone refer to it as a “wall-eyed hizzy fit”  years ago, and that picture has stayed with me.  No one else should be expected to endure your fit of unmitigated rage. If you really need to throw such a fit, go outdoors–preferably in a torrential downpour–and throw your fit where others don’t have to endure it.  You’ll cool down pretty quickly if there’s no audience.

We actually should be angry about some things.  I’m angry about pedophiles, abortionists, thieves, murderers, and corrupt politicians.  I’m angry with people in spiritual leadership who abuse their power,  behaving in ways that no man of God should even think about.

What I want to point out here is that it is not appointed to me or to anyone but God to deal with this kind of evil.   My anger is justifiable; to take vengeance into my own hands is not.

Too bad we can’t do some tarring and feathering of the corrupt politicians, isn’t it?

But really, if we start that sort of vigilantism, it will only increase the decline of our society.  We can–and should–vote them out of office; we can prosecute crimes and put perpetrators away for a long, long time. But we can’t just go out and wreak havoc because we are angry.

Very few of us do, you know.  Which brings me to an important point that I will talk about next week:  We can control our anger when we know we have to.  Angry outbursts and temper fits are choices we make. We’re lying when we say, “I just can’t help it.”  Yes, we can.

Tune in next week for more.